What Landlords Need to Know Regarding Let Property Campaign

As a landlord, there are plenty of things to figure out; the most important thing among the whole lot is finalizing your taxes. Whether you should declare your rental income or not is one of the most significant hurdles when discussing tax issues. After how much time should you disclose your rental income? What happens when you cannot declare the income on time? Property investors or landlords have to face immense issues while sorting out things; that is why HMRC launched Let Property Campaign to figure out all things for convenience.

The main thing a landlord has is his land. He has used the land as a rent-out option to earn money. So, this is considered a business. Business comes with profits and taxes. Rental income and other income taxes are the main things to handle. The campaign applies to inland properties that have residential or overseas owners.

The main objective behind this disclosure is the safe and straight handling of the tax affairs that comes with many disadvantages. If someone has a pending tax list, then according to LPC, he will be given 90 days to clear those taxes.

While going through the scheme, remember under what category you as landlord fall. If you rent a shop, garage, guest house, hotel, or a lockup, these places are not liable to LPC. However, other residential options and the multiple properties that you might be renting out to different people fall under the category of LPC.

Disclosing your tax affairs officially does not harm you as much as you think. Disclosing taxes voluntarily might save you and make you less burdened in terms of penalties. Connecting with the campaign’s primary objective, the whole procedure is to encourage the landlord to pay their taxes on time, and if, in some cases, they have something due, a period should be given to them to clear the dues and act as a responsible citizen. 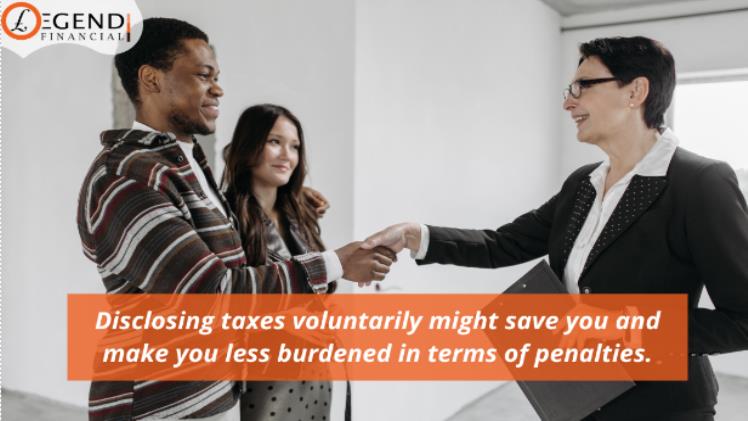 As a landlord, if you think you are interested in the campaign, then there is a proper procedure to follow. You have to get in touch with HMRC and tell them about your interest in the campaign. After that, the legal process of the disclosure will allow you to disclose all the tax liabilities, tax rates, and the corresponding tax returns that you were supposed to be paying but didn’t.

During the whole process, cooperate with the HMRC officials and honestly answer each question they ask. HMRC may follow your record for the last 20 years and let criminal investigations in case things start appearing doubtful.

After the whole disclosing process, make an offer with the representative. Try to pay the liabilities and the pending amount within the given time. Even at this stage, HMRC might cross-check each detail provided by you and may demand tax records you have previously paid. They are free to judge the accuracy of the information given by the landlord.

HMRC follows many methods that approve the submission of tax amounts, but they prefer paying taxes electronically. As it is more convenient to keep a record of payments, a Payment Reference Number

(PRN) is issued to the landlords while paying the tax. The PRN matches the allocation of the payment with the actual payments made.

This campaign fits best for those landlords who have been renting out their properties with a large amount of tax on due or having multiple properties on rent that, in turn, falls them an additional rate of tax liability. This campaign might be considered as a last chance to notify all of the due payments before the business finally shuts down due to massive application of tax penalties.

Either its capital gains tax or income tax, all of them should be disclosed through this scheme before the HMRC discovers that you have something pending. Landlords should have a second chance to clear their dues as a landlord.

Both these situations lead to the non-submission of tax returns. Observing the situations on the broad spectrum, all the delaying factors have been included, and the landlords are stimulated to submit their tax liabilities. Notify HMRC of your intentions and disclose all the related affairs.

Coming towards the disclosure process and the penalty application, you must pay the tax. Of course, there are legal ways to reduce tax liability. But you certainly cannot escape from the tax application. All you can do is reduce the tax application by opting for legal ways. So, if you think that being a landlord, LPC will pamper you by not allowing you to pay, which will not happen.

If an error or turbulence occurred while following the terms and conditions and the time of submission of tax liability, then the penalty will be less. However, if HMRC finds out that you have not been paying tax just because you don’t want to pay tax, then the penalty will be much more than the expected amount. So, the best way to reduce the burden is to follow the simple pathways instead of looking for backdoors and loopholes.

Of course, there might be conditions when you don’t have to pay any penalty, and HMRC will give you time to cover the pending dues, but all this depends on how you disclose to HMRC representatives and take tax liability seriously.

HMRC wants to keep the LPC clients in line. Therefore, you should continue disclosing all the tax affairs that fall after the tax year you opted for LPC for disclosure. That will be an effective way to keep things in order and help the landlords sort out the tax problems in collaboration with the HMRC representatives. HMRC follows the confidentiality protocols to make your disclosure much safe.

If you have submitted some amount in the rental income tax, we suggest you to recheck the whole process. In case you find something uncanny, you can approach us. We can help you by letting you know whether either LPC is now applicable to you or not.

Belize Property for Sale: Remax AssetsID Your Chance to Profit